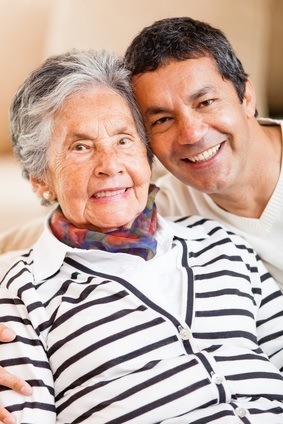 “Ma was not eating right, her house was a disaster, and she was beginning to forget her English.”

Mark was very worried about his eighty-three-year-old mother, Rosa. Though he had moved to California over 20 years ago, it was only now that he began to feel that his distance from New York City was truly a problem.

Until recently, Rosa, who immigrated from Puerto Rico in her early twenties, was always the glue of the family: She planned family gatherings, spoke to her cousins in Puerto Rico on a regular basis, and flew out to California every year to visit her grandchildren. But over the last few years, things have begun to change. Rosa felt it was getting too difficult to travel and that the family reunions in her apartment were too much to manage. Recently, she was also more forgetful; she would not return phone calls as often and began speaking Spanish with her American neighbors, who looked at her confusedly. Mark did not realize the gravity of the situation until he visited her home in Lower Manhattan last August: Rosa had lost a lot of weight, and everything was out of order in the home. Stacks of unpaid bills were piled on the kitchen table, and the refrigerator was almost empty…

“Estoy Bien,” (“I’m fine”) Rosa would say, not wanting to bother her only son. Mark decided to take a few weeks off from work to help his mother reorganize. Mark understood this was not a long-term solution and that he would need to hire someone to visit often and ensure that Rosa was eating properly and taking her blood pressure medications. But finding the right companion was not easy: Rosa did not want strangers in her home and only wanted to eat the kinds of foods she was accustomed to. In addition, troubled by the mandatory minimum hours most home care agencies required, it was difficult for Mark to find an affordable home care aide to assist his mother for only a few days a week.

When Mark contacted Alvita Care, he was happy to hear that Alvita staff members took an interest in his mother’s particular needs and were dedicated to finding an appropriate caregiver. Alvita Care introduced him to Melissa, a Puerto Rican-American home caregiver who they thought would match with Rosa. Mark and Melissa thought it would be best to introduce Melissa as a friend of the family who would visit Rosa a couple of days a week. Rosa was skeptical, but seeing that Melissa was familiar with her language and traditions and cooked the same types of foods she was used to, she quickly grew a liking for Melissa and accepted her help with errands, cooking, and basic housekeeping. Moreover, Rosa actually found it comforting to have a new “nieta” or “granddaughter,” who would visit and spend some time with her every week.

A year later, Melissa continues to visit Rosa. On her days off, Melissa even calls to see how Rosa is doing and make sure she takes her medication.

“Melissa is not only a great help for my mother; she is a relief to me, my wife, and our children, who know Abuelita Rosa is being looked after and cared for even when we are far away.”

*For privacy reasons, all the names in this article were changed.