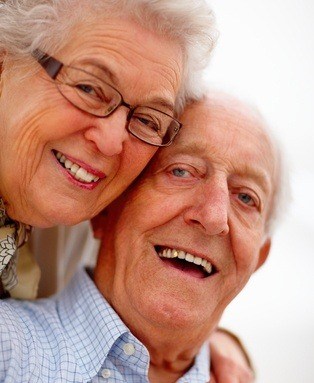 “Sometimes, I forget my apartment is across the hall.”

Bob is 89, Lorie is 93, and while they technically live in separate apartments, they are quite inseparable friends. Every morning Bob wakes up and strolls across the hall to Lorie’s apartment, where he spends most of his day. He eats his meals, takes naps, and showers at Lorie’s. They watch TV together, read the newspaper together, and even when in silence, they spend it together.

This tradition first started 17 years ago, when Bob had a bad slip in the shower and broke his hip.

Having difficulty managing on his own for the weeks past the surgery, Bob accepted Loire’s offer to spend time in her apartment. There, she could assist him while she continued her work as an art critic from home. Lorie would cook for Bob, help him get dressed, and run his errands along with hers. In return, Bob assisted Lorie with her bookkeeping and kept her company while she worked.

This was quite an unexpected situation for both Lorie and Bob, who had been widowed at an early age and used to living alone for a long time. Neither had children nor family in town, and neither seemed to mind.

When we asked Lorie about the nature of their relationship before Bob’s fall, she replied, “we had always been friendly neighbors and assisted each other with a favor or two when we could. But after Bob’s fall, we just got used to being together, and it was nice.”

“It was comforting to have someone around after so many years.” Says Bob. “Sometimes you don’t realize how lonely you are until you get used to something different.”

So when Bob recovered from the surgery, and for years to come, he continued to spend most of his days at Lorie’s.

Almost two decades later, Lorie’s and Bob’s pace and lifestyle have changed enormously: Lorie stopped working and has difficulty walking, and Bob’s memory often slips up; Lorie and Bob each have a home caregiver from Alvita Care who helps them with personal home care. But what hasn’t changed is the unique nature of Bob and Lorie’s friendship.

“Before knocking on Bob’s door, I always check Lorie’s first,” says Alana, Bob’s home caregiver for the past three years.

“I used to not get it,” says Jasmine, who helps take care of Lorie. “They’re not just regular neighbors, but it’s definitely not romantic…I guess it’s what friendship is truly about.”